The Nath tradition (Sampradaya) is a timeless lineage of spiritual masters, connected with Infinite Consciousness through the greatest Yogi of all ages, Babaji Gorakshanath, (the same introduced in Yogananda’s Autobiography of a Yogi as Mahavatar Babaji). These ancient yogis discovered that the secret of cosmic consciousness is intimately linked with breath mastery. The life force, which is ordinarily used for bodily functions, can be channeled for higher activities by a method of calming and stilling the ceaseless demands of the breath.

As we peer into the akashic records of the misty past, we get a glimpse of the lineage of the Nath Yogis.

It began from Adi Nath, Lord Shiva himself, who gave it to his consort, Parvati Nath. She gave it to Shanmuk Nath, Ganesh and Nandi Nath. Then Lord Krishna as Vishnu initiated Lord Vivasvat, the Spirit of our sun.The lineage was later guarded by the kings of the solar dynasty.Then Vaivasvat Manu, King Ikshavaku down to Harishchandra, then to Lord RaghuNath (Rama), 47th in descent from Ikshavaku (He is the 8th Rudra, esoterically connected with Shiva Goraksha Babaji).

It is through this grand lineage of the Nath Yogis that the royal science of Kundalini Kriya Yoga has been preserved and handed down through the corridors of time by the ever living Shiva Goraksha Babaji. 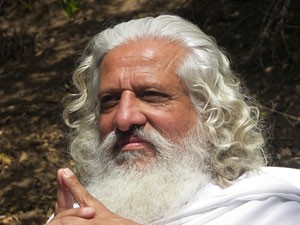 Yogiraj Siddhanath is descended from the solar Dynasty of Ikshavaku Ram. His spiritual lineage is also from the same source – blessed by Mahavatar Babaji to spread this Divine science of Kundalini Kriya Yoga in the East and West.

The Nath Sampradaya does not recognize caste barriers, and their teachings were adopted by outcasts and kings alike. The heterodox Nath tradition has many sub-sects, but all honor Gorakhnath and Matsyendranath as their originators and supreme Masters.

For Guidance & Insight on the Spiritual Path