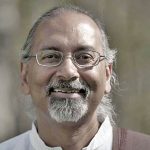 Rudra Shivananda is a disciple of the Nath Master Yogiraj Siddhanath and has been empowered by the Master to teach since 1998. He has dedicated himself to the well-being and spiritual evolution of humanity. He believes that the true evolution is that of consciousness and true healing is self-Healing. When human evolution advances to the highest level, and super-consciousness is awakened in the general population, then societies can exist completely in harmony with each other and with nature. Only then, can humanity enjoy true peace and happiness.

Rudra Shivananda is an adept of Kriya, Hatha, Mantra and Kundalini Yogas. He teaches that the only lasting way to bring happiness into one’s life is by consistent practice of awareness and transformation.

For the well-being of humanity, he offers selfHealing workshops, utilizing the power of chakras, shakti, breath, solar rays, mantras, crystals, gems and oils to enhance the healing powers of the body-mind-soul complex.

For those who seek self-realization and higher states of consciousness, Rudra Shivananda offers workshops in Kriya Yoga, an integrated approach combining physical postures, breathing, meditations, mantras or words of power, and devotion. He offers also workshops in Kundalini Yoga for those who resonate with more forceful methods.

In this spirit of speeding up the evolution of consciousness, Rudra Shivananda has committed himself to spreading the timeless yogic techniques of the ancient Naths and Siddhas, the Immortal Masters of Yoga in a contemporary manner.

Rudra Shivananda advocates an integrated approach which involves attention being paid to good bodily health. He is a Reiki Master, Shakti Healer, and is proficient in the use of herbs, gemstones and oils.

He has written eleven books on various aspects of Spiritual Science and Healing. Click here for more information on his books and CDs. Visit here to find his books on Amazon, including those on kindle format.

Rudra Shivananda is a house-holder with 2 adult children and worked for 28 years as a technology professional in Silicon Valley before retiring and devoting his time to serve humanity’s spiritual needs. He has advanced degrees in electronics engineering and business management as well as a doctorate in laws. He has given initiations and workshops in USA, Canada, England, India, Spain, Ireland, Brazil, Russia, Japan and Australia, Singapore and Malaysia.

For information about his workshop schedule:
email: workshops@rudrashivananda.com

For Guidance & Insight on the Spiritual Path